Yesterday I upgraded to 500 Mbps plan from earlier 300 Mbps one. The plan has changed as per the Tata Sky Broadband App. However, the speed is still unchanged at 300 Mbps. I called up CC and they confirmed that plan has changed from their end. I am testing using CAT6 cable connected to my PC so Wifi is not a bottleneck. Speeds are exact 320 Mbps Up/Down. They even marked my raised support ticket as solved. The CC guy told me that I should be thankful that I am receiving at least 300 Mbps. I told him categorically that I have paid extra for 500 Mbps speed!!!! I should get 500 Mbps. Cannot believe the height of incompetence.
Anyone knows higher ups to contact for this ?

Did you restart router?

Yes , restart router but not immediately, shut it off for a few minutes then power it back up?

Restarted 10 times in 24 hrs but no change in speed.

Engineer visited my place just now. He spoke with a guy at NOC and they were working on it for an hour. After multiple Nokia router reboots, speed still unchanged. Who hires such incompetent morons?

My issue has been marked as resolved in support ticket as per their app. Great service!!

Finally updated after much complaining. Why are simple things like plan change made difficult 10x for customers? 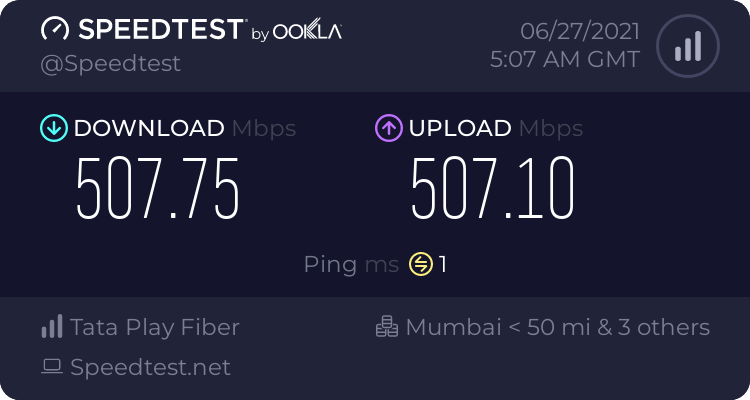 @tatyasky how's speed on different servers around the world on 500Mbps plan ?

Download speed is 300-500 Mbps throughout the world. But Upload speed for “Out of India” servers is capped to 350 Mbps. I just cannot get higher even on Singapore.
S

tatyasky said:
Finally updated after much complaining. Why are simple things like plan change made difficult 10x for customers?

Are you getting this speed on their Nokia router?

@spsneo I have put their Nokia ONU in bridge mode and I am using Asus RT-AX88U as primary router. That’s why the consistent Wifi and Ethernet speeds.
S

@tatyasky How were you able to get the bridge mode enabled? I asked their customer care they denied it.

I got it done from the guy who came for installation. So from day 1, I am on bridge mode.

@tatyasky Can you make payment of Tata Sky broadband through Google Pay app ?

Can you try adding your TSBB account no. via DTH option > Tata sky on gpay app, & check whether it pulls up past or current bills of yours ?
C

This can happen if your area is still not upgraded to 500 or 1 Gbps. Find out from the local team if it is possible. When I called for an upgrade the call centre said its possible but the local TSBB tech I know said no, it is still in testing phase and he'll let me know when done. There's a disconnect between the 2 teams. The OLT has to be configured to support 500+ MBps only then will it happen even if your app says you are on the new plan

How to change (upgrade) plan midway?

SITI launches new broadband plans with up to 300 Mbps speed