Requested for a connection on 21st Jan referred from @varkey I live in Kasturi Nagar Bangalore. The sales guy was really cool to answer all the questions i had and even connected me to his technical support for the questions he didn't know the answer to.
They initially told me it would take 5 days for the cable to be installed and activated but as i was only moving here on saturday so got my cabling done on saturday and the guy called me up on sunday for activation but i was not available here so i had to reschedule for monday and then after few calls they installation guy showed up on monday evening.

Okay got my connection on Monday (28th jan) the installation guy setup the D-Link router (setting up ONT and everything took around 15 mins )which i then replaced with my Netgear R6800 (had to go to 1.254.254.254 to login register a new CPE as i changed my router my internet took 2-3 minutes before it started working) Youtube , Netflix , Google Drive easily crossed over 500 Mbps with Google drive actually giving me a pretty stable 700 Mbps.
While speedtest to Spectra bangalore server gives me 700 down and 800 Up.

@kevinkeller @Absinthe @varkey all of you mentioned that spectra is capping torrent speed i too initially got 10 Mbps on ubuntu distros and on well seeded private torrents but connecting to a VPN running on my gigabit vps gave me 300-500 mbps
but then while downloading one of the random public torrent my speeds were above 500 mbps.

Now here's what I did after that went into qbittorrent and changed the setting to random port at startup and after the restarting the torrent client i was getting full speeds on torrents no throttling. I dont know how exactly they throttle torrents but this fixed it.

I changed the router for testing and registered it as a new CPE my IP changed and i screwed myself now its again limited for 10 mbps nothing i do is fixing it! but still the specific public torrent is still giving me full speed with no caps


Now I used my old pentium dual core laptop as a Ubuntu server and ran a rtorrent instance on it (the server is DMZ'ed in my router with a static IP) and i can access the server remotely (also speeds on rtorrent isn't capped for both public and private trackers) i used ports above 4000 and all seem to work even plex works great and is remotely accessible. even SSH and FTP works but had to use uncommon ports as i couldn't portforward 21, 22 , 80 and 443

Downloading multiple files from multiple sources (2 from finland , 1 from google drive, 1 from US ) yielded 780 mbps at average and 860 mbps peek speed. 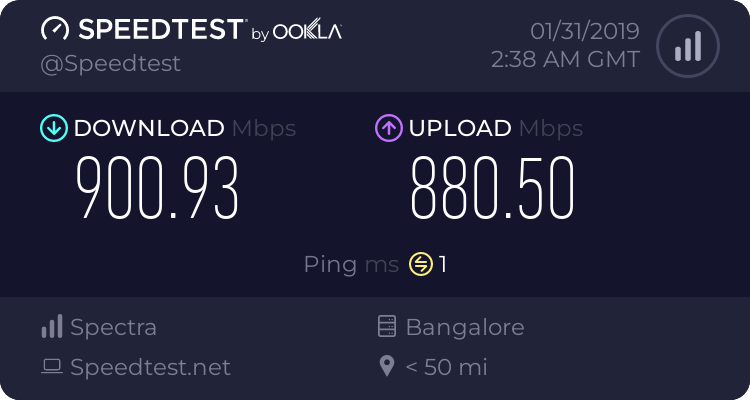 Had a pretty good experoce from the time I got my connection till July so about 6 months
There were few issues with very high latency to Singapore but they did fix it, most part of it atleast,
But from 14th July Sunday internet went down around 2pm since then everyday the internet has been down for anywhere from 6-14 hours everyday or even more it's Saturday now still not fix when asked they say the fiber has been cut were trying to fix the issue permanently then it gets fixed but same thing in few hours after its been fixed again the internet goes down.

Thinking about getting a backup connection now. Would've already gotten jio giga fiber to test but they say they need to remove the flooring infront of the house but the owner of the house i rent doesn't want that.
Last edited: Jul 20, 2019

So spectra gives you a public facing ip? That looks great. Looking at your post, spectra is offering a nice connection. Btw what's your location- Bangalore or Delhi?

bangalore. (it's mentioned in the spoiler part of the initial post)

@The_PC_Guy can you download these files and tell what speeds you get for each?

alphago said:
So spectra gives you a public facing ip?
Click to expand... 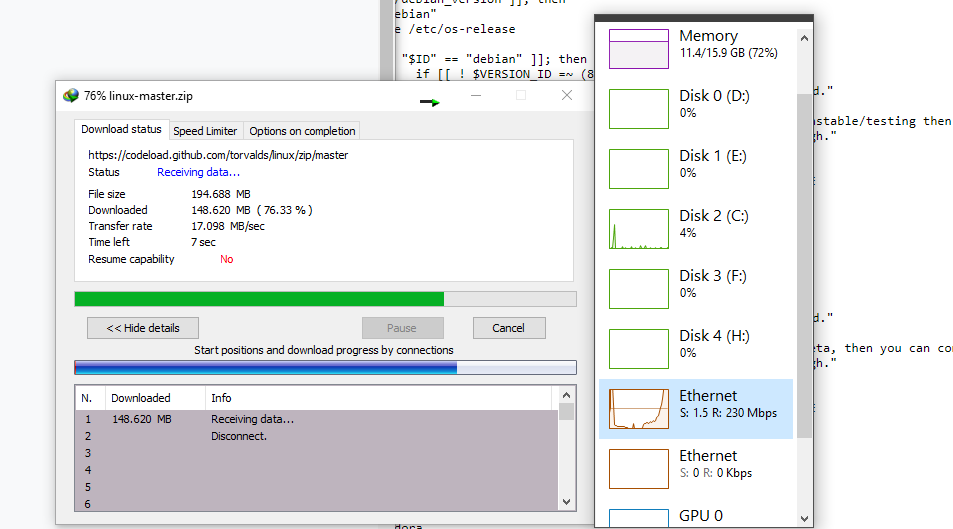 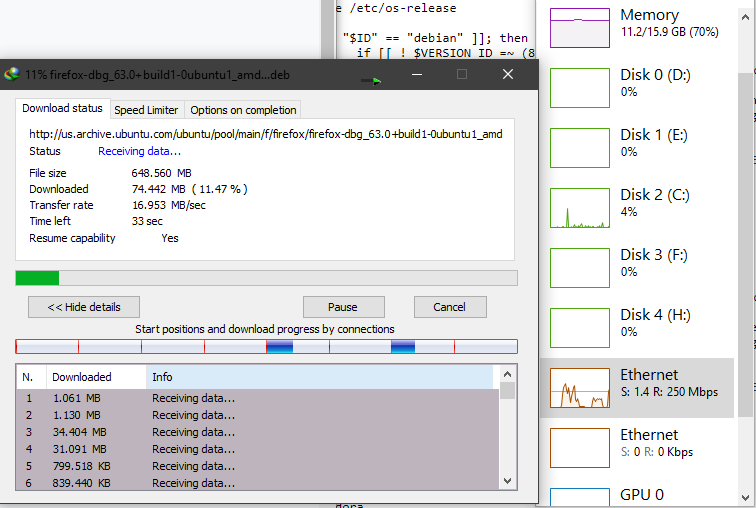 So its been a couple of weeks and kept noticing higher pings to singapore checked against my own servers and the pings were over 350+ ms and about 180+ to most AWS servers located in singapore speedtest to singapore servers like singtel was again more than 350+.
Double checked my results with @varkey who lives in the same neighbourhood and same results.

Same day at around 6 PM i get a call from Spectra to confirm if thhe problem still exists as they have optimized their rotuing to that IP indeed the ping had gone down 180 from 350+ ms but checked with another IP that's in the same datacenter but that's still 350+ . so i told them their entire routing to singapore is bad (at this point i had noticed that ping to Tokyo and Seoul is pretty good and it actually goes to bangalore --> chennai --> singapore -- > Tokyo --> Seoul )

Created another support ticket on 19th around 12:30 AM explaining them that the previous problem wasn't yet fixed and the support ticket was closed. support guy checked the details and told me they have said they cant optimise it anymore thats why the support ticket was closed but i told him that both the IP's belonged to the same data center while they optimised the first IP for half the latency why couldn't they do it for the second one. But he just kept saying nope nothing can be done on that matter.

New support ticket was closed as soon as the conversation was over.

so today on the 20th I again started using my server and the response time was pretty quick and very noticable. So did a traceroute on my VPS and PUBG AWS servers and could of other speedtest servers and the ping is actually pretty great anywhere from 45-90 and around 100 on speedtest servers

they finally route the connection from chennai. So finally the problem is fixed but still the support communication on this was pretty bad

neeleshbharath said:
Account ID - 187313 |
i am not having connectivety for the third day in running the connectrion worked for 10 minutes, I want all other people to know that please do not subscribe to Spectra , You will be writing mails, making calls to get the connection to work continously but these people will not be bothered to resolve your issues, my biggest regret is going for Spectra Connection, PLEASE DO NOT MAKE THE SAME MISTAKE
Click to expand...

This is in Bangalore . Indiranagar Area

@The_PC_Guy Yes this week has been crazy, since last Saturday or Sunday, every single day it was down for several hours. I was literally spammed by their mass outage notifications which was never ending 🤣🤣

Last night also, it was down till around 3 am or so. 🤷‍♂️

I've asked them for refund for the downtime over the past one week. 🤞

Spectra "Gigabit" is now Half a gigabit

Some things are very slow on Spectra