Plan upgraded from 949 to 999 but speed remains the same 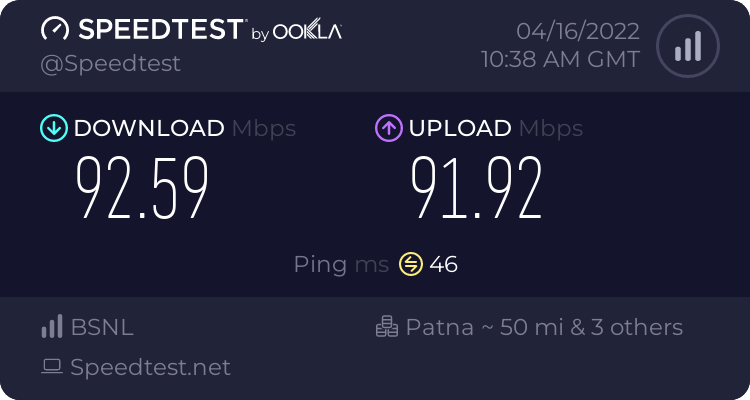 Same as in previous plan. Even after several call from 2nd april till it has not been resolved from BSNL end or the fiber agency end. Sometimes they say your plan is not activated ,then they say we have allotted the speed & your router does not support that much speed. Sometimes they says something about power in the optical fiber but they are not interested in resolving my problem.
I have send them the result using only the ONU (Novavision) without the router (TP-Link AC1200) that my router is fine. I have also lodged a complain which is still pending. No help from the exchanne SDO ,JE or the fiber agency. Should i shift to airtel ?
H

The speeds seem to be limited by a 100Mbps link somewhere, are you sure your device and router support 1Gbps?

If you have two LAN ports in your ONT/ONU, move the LAN connection on the ONT/ONU end from one port to the other port and check if you are getting the upgraded speed.

i have checked on the other LAN port and also checked already without the router only using ONU in route mode. The speed (D/U) comes around 90 Mbps. I am also using a CAT6 cable from my PC to the router .Others LAN cables are 8 wire cable from router wan port to the ONU. The wires are in the building underground wiring.
Network adaptor : Link Speed 1000/1000 (Mbps)

Now the exchange is saying they provide 100Mbps only in 999 plan. Ridiculous. Sometimes they says they have allotted 150Mbps ,then sa my router ,onu is bad ,then they say the 999plan is not activated and now this that the plan is activated but it gives only 100 Mbps.
I have already lodged complaint and now i have lodged a grievance.

Are you sure your the link speed from ONU to Router is 1Gbps? Can you check in the ONU status page? Or router status page

i already checked my speed using only ONU and laptop in route mode using a CAT6 cable . Now another angle of the problem is that the BSNL people are now saying that they provide only 100 Mbps in 999 plan.
H

What is the link speed you are getting when connected directly to ONU?

i already checked my speed using only ONU and laptop in route mode using a CAT6 cable . Now another angle of the problem is that the BSNL people are now saying that they provide only 100 Mbps in 999 plan.
Click to expand...

Then there is no way of increasing speed, just downgrade again. You won't notice much diff b/w 100 vs 150 in common household use anyway.

BSNL advertised 150 Mbps speed in 999 plan but their people said that they will give 100 Mbps only. Speed matters in geforce now.

1. Post network adaptor ss to confirm that it is actually GbE.

3. If using your ONU in router mode then change the MRU value to 1460.

seeing the speed test result it seems that the issue is with network link negotiation as FE link bandwidth hovers around 92Mbps.

I called to SDO and he confirmed that there is 150Mbps in 999 speed and it is being resolved from their end .they have requested to give them some time. So i will wait a few days and see.

Here is my plan details

Simple and lightning fast image sharing. Upload clipboard images with Copy & Paste and image files with Drag & Drop
pasteboard.co
MRU is currently 1492.i will test it on 1460 and post the result .
Last edited: Apr 20, 2022

Also, you can do iperf3 test to see if the problem is at your end or ISP's. 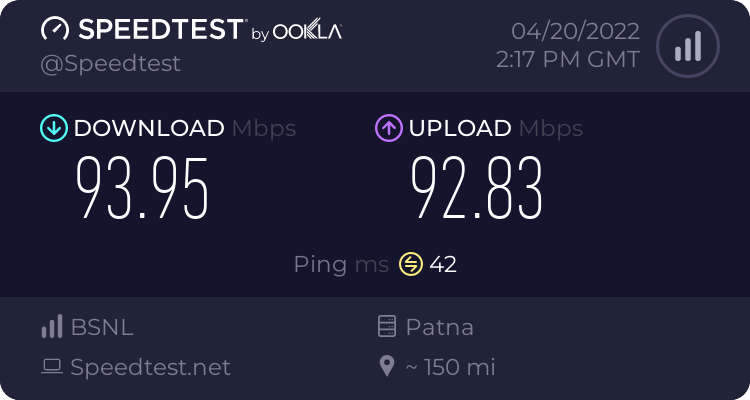 And i have no clue about iperf3 test .