So this post is a bit off-topic but related to the BSNL FIbre. Mods feel free to move it to a new thread or section if need arises.

So, now that I have got the fibre connection, I also had to get this ONT from Syrotech. Initially, I wanted to get the Huawei ONT as I had heard it had better stability and features but due to the lockdown, I was not able to procure it. The Huawei ONT also only had two 3dbm gain antenna compared to 5dbm on the Syrotech. Long story short, I got this Syrotech 1100 WDONT ONT directly from BSNL @3k.

Since I was moving from BSNL Broadband I had a D-Link 2750U Modem/Router that has served me well for 8 years now without a hiccup. Back in the days when DSL was in vogue, BSNL used to provide their own routers as an option, and they were well, not very good. They used to overheat a lot causing random shutdowns and connectivity problems. The Dlink 2750U router had no heating issues.

Now coming to my main purpose of this post. Since I live in Northern India, in the NCR region, the temperatures here during summers tend to cross 45C. I was skeptical about heating issues on the Syrotech ONT. Luckily, it has an inbuilt temperature monitor page, unlike my old Dlink. What I have noticed in my 4 days of usage is that the temp on this ONT goes up to 50C with normal usage and sometimes up to 60C under heavy load. This was a cause of concern for me. I know that the router can easily withstand such temps but running it hot for a longer term can affect its longetivity. It does come with a 3 year warranty but electronic components do not die outright unless a major malfunction but tend to age with time, extensive heating reduces their lifespan and performance. The maximum temp in my city is hovering around 40C, with ambient room temps at 30C without fan and AC. This will increase with time when outside temps go higher.

With this problem in mind, I looked for some solutions on the internet and I came across a post about cooling the router with a PC fan. I did a small DIY and managed to put together this contraption. I use a 80mm fan from an old pc, I chipped off its connector and joined it with one end of a USB cable. This is a 12V fan, but I power it using a 5V charger which makes it run slow, hence no noise and vibrations. I use this temp monitor to keep an eye on ambient room temps. This reading is without airconditioning with outside temps at 40C.
After putting together this DIY I was unsure about where to keep the fan, and whether I should use it in a push config or a pull config. The Syrotech ONT that I have has vents only on the upper side. Initially I thought about putting the fan over these vents to push/pull air. But there is a possibility of dust accumulation. However, just to test the efficiency of this setup I put the fan over the ONT and ran it for 10mins each, once in pull and once in push config.

Here are my obervations at ambient temps (30C approx) with no aircon on for 10 min:


I was however bothered with the dust accumulation inside the ONT, so this setup is not feasible for longer duration unless the fan has a dust filter, even with a dust filter the best config is the push one as air is pushed into the ONT and again pushed out throught the other vents. Since, I dont have a dust filter handy and I cannot get one due to the lockdown, I changed the position of the fan. Instead of blowing air into the vents, I put the fan besides the router and blow air across the ONT, not over the vents but over the solid part. The airlfow is also half because half of the fan remains hidden besides the router. Temps with this setup hover at 27C with load and no aircon, and 21C with load and aircon. The AC temp is set at 22C. I am now happy with the overall results. I haven't monitored changes in performance and range and will report about it later. Also, do note that the fan I am using is from a PC that is 12 years old, its a non branded Chinese unit, I was surprised to see that it even works. I am sure newer fans, even cheap ones bought from computer shops will be highly efficient and branded ones from something like Coolermaster can surely freeze cool your ONTs. It might be worthwhile to invest in one if you own a expensive router.

This Syrotech ONT itself is very good and I get full signals through 4 layer of walls with no speed difference between WiFi and LAN. I also checked the box and its manufacturing date is Mar 2020, kudos to BSNL for that. I have a 50mbps connection.

I would recommend that others who try this to check the vent postions, some Router/Modem have their vents below, some have them at the back (my D-Link had two at the back). I power this setup with a seprate 5V USB adaptor, other routers/modems may have a USB port and power can be directly drawn from that, so you won't need the adaptor. But drawing power directly from the Router can generate additional heat and can cause issues over a period of time.

I have seen some setups that use 40mm fans that are very small and can be installed inside the router. (not recommended when in warranty).
I would try to source two 40mm fans and use them in a push-pull config with a dust filter once this lockdown gets over.

This may be a stupid and silly DIY but yeah, it gets the work done.

@thenextstar Did you use fan for D-Link too?If yes, did you use at the side or kept it below router ?

What is your D-Link 2750U hardware version?
I have my ont to bridged mode and using D-Link in routing mode.And upload speed doesn't cross 35Mbps, download varies from 20-48Mbps.
Can you connect D-Link on routing mode and check if you are getting the same speeds as you get from ont?
Last edited: May 3, 2020

Oh...btw dust accumulation should not be your concern.....
Fans are dirt cheap....but you can get a coolpad for 300 which will be good to rest below ont.They last very long and are silent.
Btw,ONT can work great upto 65 °C as per specs.

TurboUser said:
@thenextstar Did you use fan for D-Link too?If yes, did you use at the side or kept it below router ?

What is your D-Link 2750U hardware version?
I have my ont to bridged mode and using D-Link in routing mode.And upload speed doesn't cross 35Mbps, download varies from 20-48Mbps.
Can you connect D-Link on routing mode and check if you are getting the same speeds as you get from ont?
Click to expand...

My hardware version is U1 and to correct a typo in the main post, the cooling vents are at the front in my hardware revision.

I did connect my Dlink in bridge mode at first and it had very bad speeds not even crossing 30mbps on download. And its wifi range is poor as compared to syrotech, so i removed it. My hardware version is the oldest, maybe now they have better speeds on WiFi on latest ones. So yeah, you are right about poor speeds on Wifi on dlink. I dont know about newer hardware revisions.

@Kick933 IMHO, you really should worry about dust accumulation. Dust when starts settling on the heatsink considerably reduces its conducting power as a result the router will run hot which in turn affects its performance. I am talking about dust that starts forming layers, this won't happen in a month but it surely is a cause of concern else we won't have dust filters.

And, a cooling pad won't work in my case because my vents are above not below, so all that the cooling pads will be doing will be blowing air onto the hard plastic which doesn't help, and if they are of pull config then its utility is next to zero. They surely can help those who have vents below. 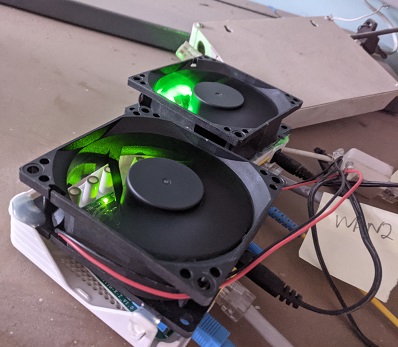 I just did this lol. Delhi is dust city so it'll be gross real soon.