Airtel Prepaid Tarriff will be hiked from 26 November, 2021

How long before my Rs 749 postpaid is also hiked
Already that plan is replaced by Rs 999 plan, but old users like me are still continued on it.

ijsa said:
If only they improved their network..... could have retained their market share..... now with people getting rid of second sim..... they will further lose market share...
Click to expand...

Airtel and Jio Annual plans together for people with 2 SIMs in best option IMO.

While I understand why they need to do this & agree that excess data is not feasible in long-term. I do wish that some low cost options remain for someone who wants to have a second-sim for some basic purposes.

We have a SIM at home for an elderly relative's banking needs (OTPs/Logins alone). Dont even need data/calling. While it is not a question of affordability - we are literally paying that monthly amount just for OTPs - not to mention the banks charging some amount for sending the OTPs.

Others may also have some numbers just as fall-back for incoming only. Having said that, we have been spoiled a bit I guess - as I remember, there was a time when 200 was indeed the minimum needed to remain connected.

SVK said:
How long before my Rs 749 postpaid is also hiked
Click to expand...

Which plan is this? Details?
T

mhsabir said:
While I understand why they need to do this & agree that excess data is not feasible in long-term. I do wish that some low cost options remain for someone who wants to have a second-sim for some basic purposes.

We have a SIM at home for an elderly relative's banking needs (OTPs/Logins alone). Dont even need data/calling. While it is not a question of affordability - we are literally paying that monthly amount just for OTPs - not to mention the banks charging some amount for sending the OTPs.

Others may also have some numbers just as fall-back for incoming only. Having said that, we have been spoiled a bit I guess - as I remember, there was a time when 200 was indeed the minimum needed to remain connected.
Click to expand...

I bought a Jiophone for my grandma just for this. 750 per year is quite reasonable
S

Was wondering if I should que an annual plan for my jio sim? Never know when this virus will spread to other service providers?

Phones have been made an essential service for us now. Almost an identity device.

MadAxe said:
Which plan is this? Details?
Click to expand... 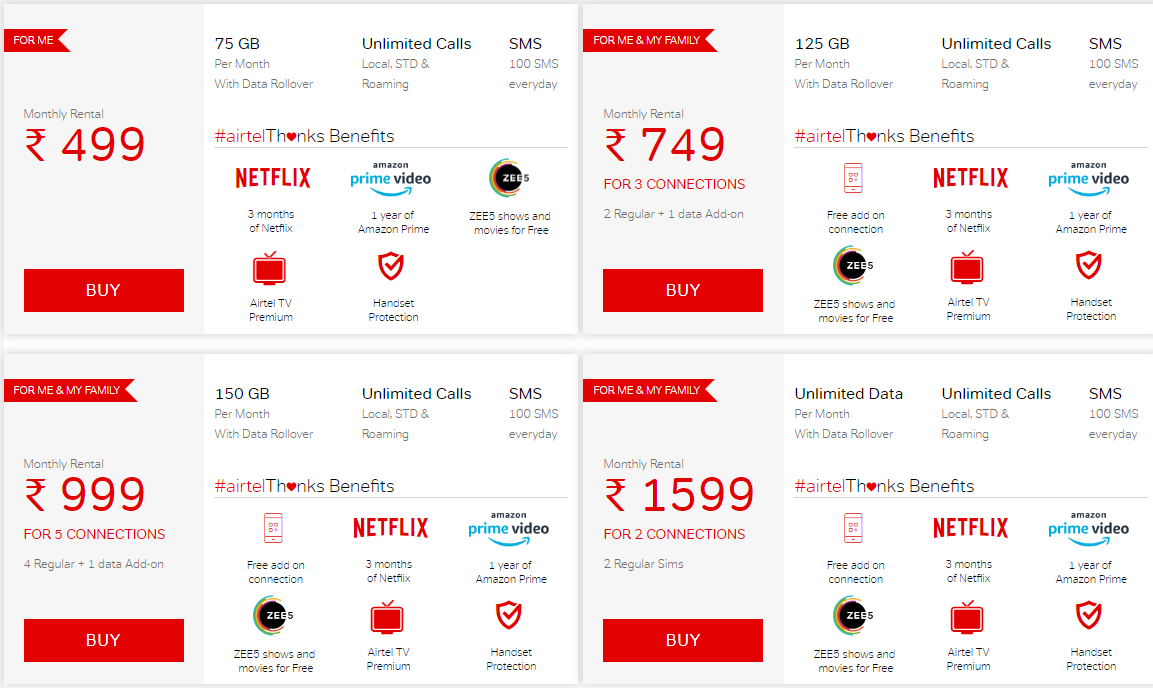 broadbandforum.co
But this plan is not available anymore.
C

From my experience Airtel is better at least in my city comparing to Jio which is my primary network. I don't mind paying more as long as the quality of service improves at least in proportion (if not more) than the percentage quantum of hike in tariffs. I am on the lowest possible Jio and Airtel prepaid (monthly or quarterly renewal only) + postpaid plans for my and family members' connections. They suffice for now.

But, I admit that while cheap data is a huge temptation it has its own downsides over the mid to long term including congested networks and slower speeds and obviously a negative financial impact on these Companies which makes them hesitate to upgrade their technologies for e.g. to 5G, improve QoS and expand their network. Believe it or not Vodafone and Idea even before their merger were better placed than they are now until of course Jio came along and turned the industry on its head back in '16.

Add to this, the greed from the govt to milk as much revenue as possible from the spectrum. As already mentioned in the reports, India's base price for 5g spectrum is the highest in the world, one of the reasons why allocation has been delayed. With govt's shrinking revenue sources, they would try to milk from whatever source available, petrol, diesel, gas, ATF, spectrum.. the list goes on.
There are multitude of factors so it would be wrong to blame telcos in the entirety. As mentioned by mhshabir, we are already reaching the ₹250 mark which was near about the same price before Jio disrupted it.
On a different topic but same practice, Jio is disrupting the e-comm sector and people are already in arms about this.
I

Tejas01 said:
They don't need to or improve only by a small amount. There will be people who would leave once these tariffs comes into practice. This would lead to less congestion on the existing infrastructure and thus better service.
Airtel's playing smart... Kick out those low paying customers to Jio or VI. If you want good service, you will have to pay... atleast that is their mantra.

This is not the case always...... I personally do not like Ambani's and would boycott their any and every product, if I can afford to....... Now Airtel has been saying that for last 20+ years that they are improving the network at the site near my home...... never got indoor coverage in Airtel..... even in data Jio is better..... you will get CA all through Delhi but not on Airtel.

On the other hand I cannot find any place where you do not get Jio network....

Even with higher prices, if Airtel gives me good network, I will port the next day.

Airtel had ample time/ decades to setup good network, but they never did that..

That is true, even in my village I get only one bar with Airtel, that too on the terrace.
My point was relative to a specific area. As in if 10 people use Airtel in an area and 3 leave, the 7 should get relatively good coverage. But yeah, doesn't matter if the coverage is poor in the first place.
While no fan of Reliance products, I think time has come for me to throw morality out of window and migrate to Jio. Will see how things pan out once the dust settles.

Airtel wants other players to join in and raise the prices...effectively create a Telecom cartel.

If I had good coverage, I don't mind, but here I barely get coverage of Airtel.
M

@ijsa @Tejas01 I feel for you guys regarding the airtel connectivity. But you also need to understand ground realities. JIO obtained almost statewide permissions for their towers. They even were allowed to install on the road divider. No municipality listened to the objections. Whereas, there was a new airtel tower was to be commissioned near my place. All permissions in place yet the RWA did not let it happen.
I

I totally agree with you on post Jio scenario...... but what were they doing before that for 15 years..... constant suffering for consumer....... and regarding underhand practices...... in pre Jio era.... these Airtel and Vodafone operators totally dominated and the State player(MTNL) was being totally manipulated(intentionally bad network was put up) by them..... MTNL had good equipment but it was trash while BSNL was doing fine in other states. I find no reason to excuse them(Airtel & Vodafone).....

People staying in metropolitan cities like Delhi, Mumbai, Kolkata, etc. have been enjoying stable internet all along. So, it's easy for them to judge Jio when it comes to 'quality' and 'morality' stuff. Ask that to people from villages and even small towns.

When I used to go to my grandparents' village, I could hardly use 2G internet on Vodafone and Airtel. To place a call, I had to go out to the terrace. Even that was patchy. At my town, every network was usable more or less (except BSNL 3G of course) but cost a bomb. We had no internet except for the trash BSNL ADSL. Fast forward to August 2016, when my Mom bought a LYF phone. A free to use jio sim card came with it. Mind you, Jio wasn't launched yet and they were providing unlimited data to one and all. It was the first time in my life that I saw the Ookla Speedtest meter climb to 60 Mbps!!! Now, when I went to my grandparents' place, I could use Jio 4G, sitting inside my room. Even a 5 Mbps connection felt like a godsend for me.

While I do recognise the fact that mobile operators need to raise money for network upgradation and maybe Airtel took the correct step in being the bellwether of all telcos, where was Airtel all these year???? They were minting money till late 2016 and the ARPU was ~200 (more than that when adjusted for inflation) or somewhat satisfactory according to their terms, I suppose. Were they keen on upgrading their networks? NO. They continued to mint money from all and invested for network upgradation only in big cities. Airtel launched 4G in Kolkata in 2012. When did they launch 3G (read 2G) at my grandpa's place? In 2017-18. When did Jio launch? 2016 September. When did they launch 4G? Before Semptember 2016. So, yes. People stuck to Jio.

In fact, Airtel 3G wasn't fast enough before 2016. The average speed was ~2-3 Mbps even when congestion was low and they were charging a bomb. And yes, this was in Kolkata, where they were apparently minting great money. It took Jio's aggressive expansion for Airtel to expand their network footprint to villages.