I am using their own device and the new bottle does not fit in it. Would now have to go to the market again.
Click to expand...

Samuel said:
If I have All out turned on where I am, my nose feels weird and I have to turn it off.It apparently tries to kill me.
Click to expand...

Same thing happens with me, I also get a sore throat using it. I was reading some articles and apparently these mosquito coils, vaporisers etc. contain a lot of chemicals potentially capable of causing lung cancer. And knowing this is India, the government is not going to give a shit about researching and regulating the use of these. I have searching for alternatives that contain less chemicals.

Found anything that contains less chemicals?

The thing with mosquito killing/repelling unit manufacturing companies is that have to do these things to sell the units. They really can't just make ads that say that their product kills mosquitoes anymore because they have been saying this for a very very long time and nobody cares. Anyways the board meeting in which these companies would have decided to put a chip inside would have been very funny... Here's my take on that meeting:-
BOSS: Sales down hai.. What are you guys doing about it?
Mr. Tripathi: Sir kyou na hum apne device ke saath human shaped inflatable balloons bechein?
BOSS: .. Mr. Tripathi ye aap kya keh rahe hain. We are not into sex doll business.
Mr. Tripathi: No Sir I did not mean that. Mere kehneka matlab that ki machaar ye sochega ki room mein aur bhi log hai and they would not just concentrate on the living person but attack the balloons too. This way less number of machhars would bite our customers. The ones that bite the balloons would consider moving to some other house that they won't find any blood in those balloons and the remaining ones that bite our customer would be killed by out device.
Everyone in the room starts laughing except for a new joinee Mr. Amit.
Mr. Amit: Why are you all laughing is the balloons story funny?
BOSS: No we are laughing because in the end Tripathi said that our device would kill the rest of the mosquitoes. But jokes apart, I think it is a wonderful idea. Lets set up a meet in Bangkok this June where we will decide on this balloons thing.. Anybody else has some other idea??
Mr. Aakash: Sir kyou naa hum apne device mein ek chip daale?
BOSS: I don't think machhar is attracted to a chip and it would be a bad idea to use it as a bait. Besides that iskeliye humein 'Lays' company ke saath tie up karna padega to supply the chips. Also there is a fear that children might eat that chip and get poisoned.
Mr. Aakash: Er.. Sir main electronic chip ki baat kar raha tha..
BOSS: Oh.. I know that.. mm.. I was testing your knowledge. Ahem.. mm.. tell me more about this chip
Mr. Aakash: Sir yeh chip mein hum ek program dalenge.
BOSS: Don't be foolish.. Humare device mein LCD screen to hai nahi to program dekhkega kaun. Besides that I have observed that even when my wife watches 'Balika Vadhu' mujhe machhar bahut kaate hain. It clearly means that the machhars are not into sitting idle and watching TV programs. They are just interested in sucking your blood.
Mr. Aakash: Sir er.. mein TV program ki baat nahi kar raha tha.. Main computer program ki baat kar raha tha.

BOSS: Oh.. I know that.. I was just testing your knowledge.. So what will this program do
Mr. Aakash: Sir yeh program humans ke hand movements ko analyze karega .. If the program finds that somebody is scratching their body due to mosquito bites or they are hitting themselves or person next to them with their palm to kill a mosquito it will increase the intensity of the device to kill more mosqitoes.
BOSS: Exellent.. implement this!
Mr. Gupta (Who is jealous of rise of Aakash in the company): Sir mujhe lagta hai ki humko iske aur bhi pehluo pe nazar deni chahiye..
BOSS: What do you mean Mr. Gupta?
Mr. Gupta (happy that boss noticed him): Sir consider this. If a celeb like Mahesh Bhatt uses our chip enabled device and we all know that he keeps scratching his body without and reason for several hours. With higher intensity of scratching the liquid in the device would only last for couple of hours and he may go to a news channel and tell them that our company have fooled him into buying a bad product. That would be a negative publicity. Also media is very eager to publish such kind of stories. Aur sir agar macchar ne is program to rewrite kar diya ya hack kar diya to kya hoga?
Mr. Aakash: Don't be ridiculous Mr Gupta, we will make this chip read-only and not re-writable. As far as Mahesh Bhatt is concerned, I will add an additional code in the chip to detect if the user-agent is Mahesh Bhatt.. something like this ([color=rgb(0,0,0);font-family:'dejavu sans mono', monospace;font-size:11px;]Mozilla/5.0 (X11; Linux x86_64) AppleWebKit/537.22 (KHTML, like Gecko) Mahesh Bhatt/25.0.1364.160[/color]) and will disable the scratching code if it is true.
Mr. Gupta (Angry at himself for not having any ideas to counter Aakash's solution slams the desk with his fist)
BOSS: So it is done then.. A device with a chip inside. Write the code. And manufacture the device and sell it. That is all for now.

All Out has a new model which has an integrated fan. It also has its own specific refills. 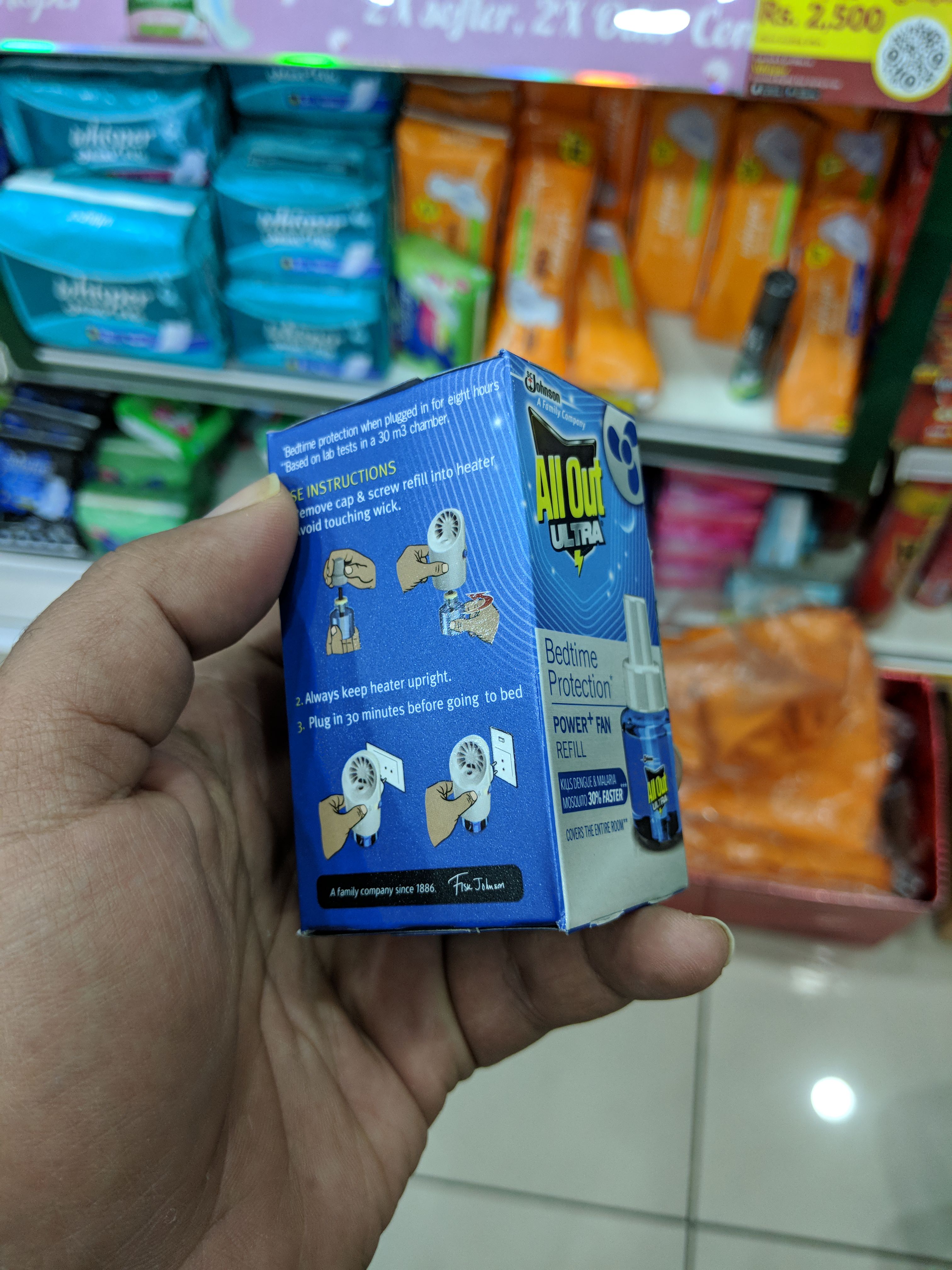 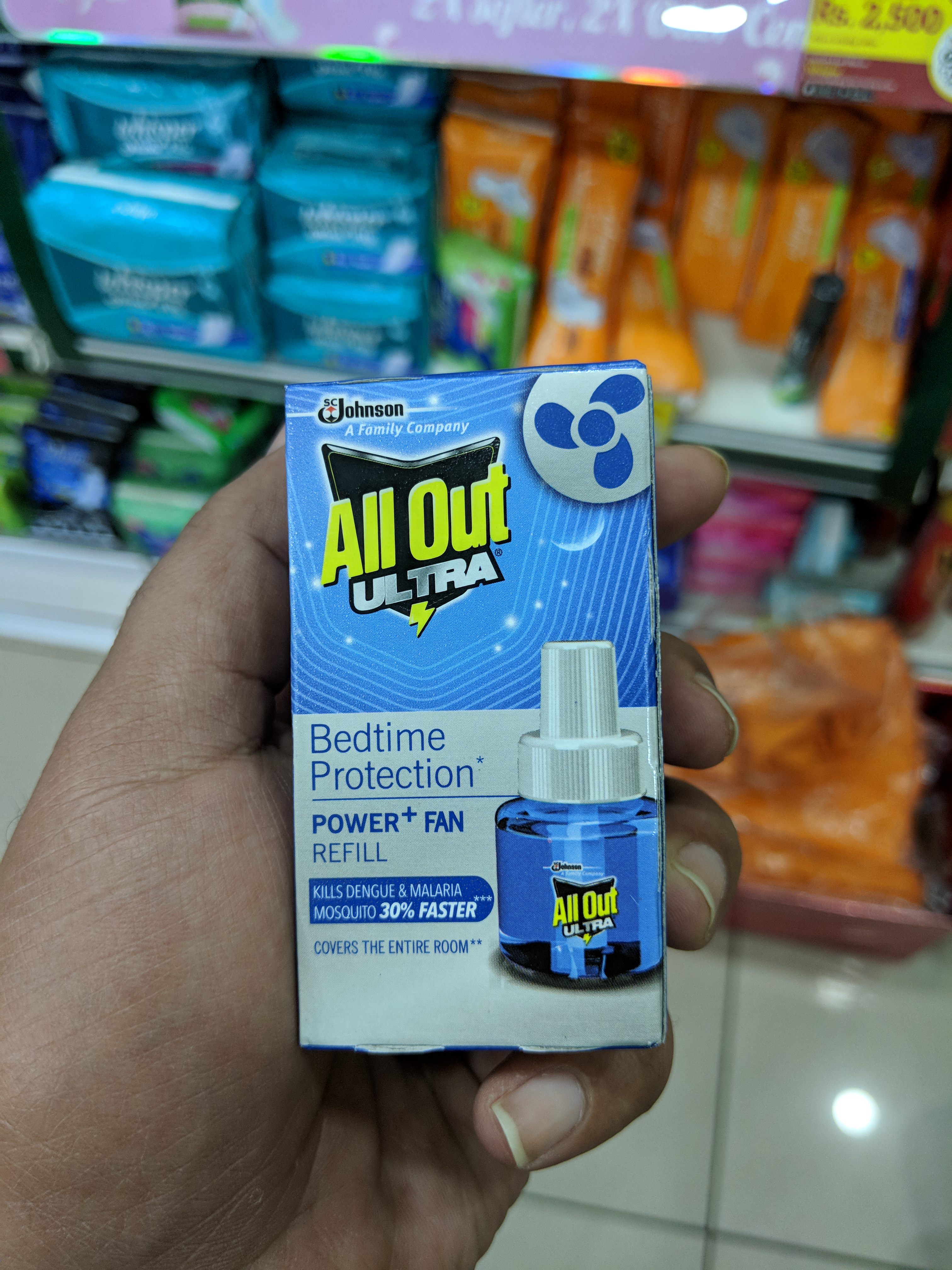 I got that machine , fan auto cut off after 15mins due to high temperatures.
Not much diff in comparison to goodnight activ+

just remember to check for the fan variant of the refill when you go shop for one!

got fan one free not much diff. with low 0.88% transfluthrin

changed with goodnight activ refill of 1.2%
Mortein inta with 1.6% was most effective.
good night advanced also got same 1.6%
all out also got some 35ml variant with 1.6% so gotta get better refill next time.

Amazon India is messed up

Hotstar seems to have fixed their login system to kick out other people accessing your account!