I have a 300 Mbps FUP plan (3000 gb) from Railwire Assam. I have been using Railwire since September when I was provided with a 100 base 100 media converter so my up/down speeds were limited at 100 mbps till Sep. 30th when my LCO upgraded it to a gigabit onu.
Now, throughout September I got a stable 100mbps on speedtest by ookla. But my Fast.com download speeds were a mere 6-15 mbps and the upload speed was 100mbps. Late after midnight fast speeds increased a bit about 27-28mbps.
Since, 30th Sep. to 10th October (Screenshots attached) my speeds were throttled at 80 mbps up/down both. Same on fast.com 80 mbps up/down.
since, 11th they are being throttled at 70. I have no idea whats going on.
The LCO has formed a whatsapp group of his customers, and the ones who have a 100 mbps plan are getting a 100mbps. on ookla speedtest.
And some say they get 100 on fast too and some say they get only 6-7 in fast.
The LCO has been very helpful about this and came to my home to check the equipment and everything seems ok. He showed me his switches too and everything
seemed good. there wasn't much splitting done in my case and the connection was directly provided through and 8 port switch. So, he says there's a true 1 gbps line at his end.
Then, He contacted the Railwire NOC and he told me that he had an argument with them. They told him that they won't be able to provide enough Bandwidth for 300 Mbps speeds in Assam.
Why Do they mention the plan in their website then? And I saw one person from sibsagar, assam post a 180mbps speed in one forum here. he had a 300 mbps plan.
How should I proceed about this and what can I do instead of just leaving them, they are the only fiber provider in area.
They don't respond to tickets and just close it. It'd be good to have more speed since there's 6 members steaming stuff continously.
Gaming :
Ghanta Gaming. Ping is low, but yaar itna frame drops and ping spikes hota hai COD Mobile pe. The critical moment you ambush and take a shot frames drop hard and ping gets high and I end up "you have been killed" hope you had fun looting stuff for 20 mins so you can give it to this guy.

**Tests were done with ethernet mostly and wifi too. Both showed no variation when upclose. I believe they do not have enough bandwidth for so many customers because they're continuously adding customers and not upgrading their infrastructure.

I also talked to my MSP regarding this and he said things will improve in about 2-3 weeks. We can't do anything. There is no other wired broadband provider in my area either, so I'm stuck with them as well.

Their backend is upgrading .. soon.. wait for a month or two...

I had a very weird conversation with railwire customer support,
He told me that gaming ip is not the reason why you are facing throttling, he said its because of ping loss of 1-5%. So he told me to contact the lco to get that sorted, now this is what that bums me out, before gaming ip was assigned, I faced no issue in speeds, only ping spikes. I told him this and he said its better you keep gaming ip for the moderate NAT and ask lco to sort out the ping loss issue. LCO will come to check tomorrow, I'll keep you guys updated.
current speed test result. 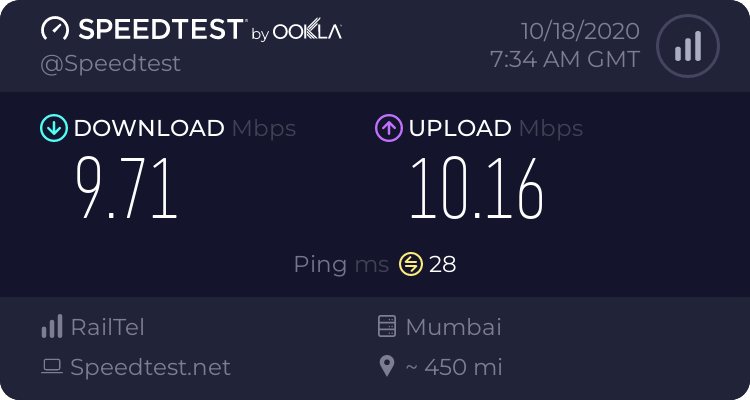 It goes as low as 512kbps sometimes during the day.
Last edited: Sunday at 1:17 PM

@sarthaktripathi I hope they do!

Currently Right now my speed is 95 percent of the promised speed that us 45mbps on wifi.. and ping is 5-6 ms.. but yesterday it was terrible.. for an hour..or so..

@[email protected] How did you start getting 70Mbps on Fast.com. Mine is still stuck at less than 10Mbps. even if I get 93-94Mbps on the Railtel Kolkata server. BTW these issues are just some weird ones and only on the Windows machine. You can try on Linux or Mac, you won't see any such issue.

@yr_1009 If you are on Kolkata NOC. they do have an issue with Gaming Ips and Windows. They can say anthing on the Phone but I had a conversation with MSP themselves F2F in their office and they say It's been reported to NOC and they are resolving it. It would take quite a long time maybe a month or so.
W

I don't think a 300Mbps connection is required even if 6 people stream together. 100Mbps is enough for 6 simultaneous streams.

Hey everyone.. I am on 50mbps plan and I get 100mbps constant on fast.com

Should I choose Railwire or local isp?