How is your ISP doing with increased traffic due to the COVID-19?

I'm curious about performance of various ISPs considering higher traffic due to COVID-19 Pandemic. Many people are working from home, colleges and schools are closed resulting in higher load on ISP Networks.
Looking at Extreme-IX Traffic Graphs Statistics - Extreme IX , I noticed that traffic usage peaked at 722Gbps on 17th March at around 10PM. There is general trend towards higher peak usage starting around 10-11th March.
Traffic usage has two peaks, one at around 3-4PM and another around 10PM; the peak at 10PM is much higher. Traffic is lowest at around 6AM.

I heard that many small ISPs are running at their max transit capacity resulting on slow downs during peak hours. I noticed this as well on 17th March when international speeds (to SG) on my internet was ~20Mbps at 10:15PM (on a supposed 100Mbit connection). It happened again yesterday night as well. My backup ISP struggled worse at ~2Mbps.

Peered services like YouTube and Netflix were working at full speeds even during peak hours (atleast for me).

Smaller ISPs tend to have more problems with this as they tend to share transit among larger amount of users to cut costs. I presume larger ISPs like Airtel (wired) and JioFiber won't have this issue or atleast to the same extent due to higher capacity.

If possible post your Speedtests to some international servers here at peak times (3PM and 10PM) and non peak times 6AM-8AM ish. To make stuff consistent, try some of the following servers:
Singtel - Singapore
GTT.net - London

For peered comparison tests, you can try the closest servers.'

I called the BSNL Office, they told that our network is crowded due to the coronavirus work from home effect, we are working on it.

This is bangalore server, By the way I am from Mysuru.

This server is located in my own city

I am not sure, whether it is due to work from home or not.
A 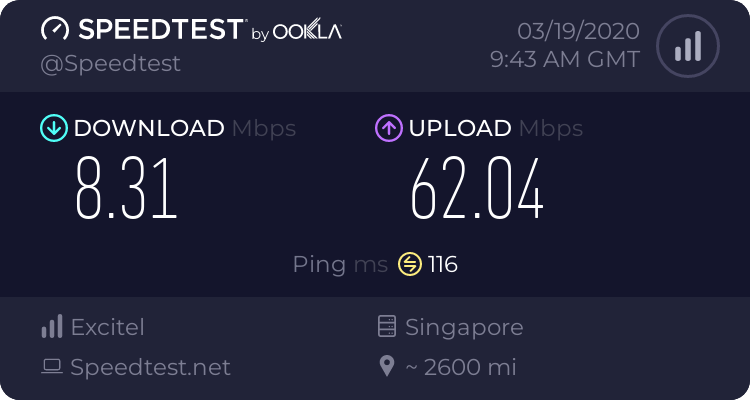 Both my UL/DL are insane; to some server at netherland/singapore I get 1-4 DL but 100+ UL , same for other servers, it is a mix match for Indian servers(full speed on those just few cities far) and ping is insanely high right now.

I lob excitel lul. Getting constantly > 90mbps everywhere.
Singtel and domestic ~ 105mbps
100mbit connection
I guess it has more to do with local congestion at LCO cause anyhow people used to access internet at home or office
A

are you on fiber? @kanurag94

I'm on bsnl is it's doing like shit as always, FTTH fails every single day at working hours (11pm to 7pm)